Circle's End and other pieces by Steve Marsh 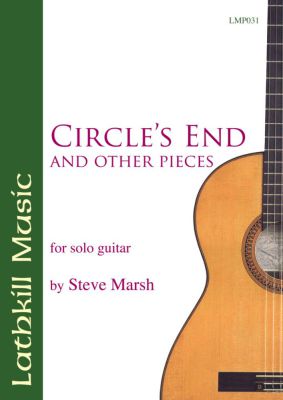 Circle's End and other pieces by Steve Marsh is a collection of eleven student pieces of a lyrical nature.

Titles are: Mystery Waltz; Carnival Time; Song for a Gentle Maiden; Mountain Stream; Rush Hour; Circle's End; The Empty Attic; When the Cats Waltz at Midnight; The Haunted Carousel; The Seagull; The Rainbow.

Circle's End was written in memory of the singer/songwriter Harry Chapin and the piece was chosen by one critic as his 'Pick of the Year' piece in Classical Guitar magazine after it was included in their music supplement. It has been recorded by Tetra Guitar Quartet member Graham Roberts on his CD The English Guitarist.

"Among these programmatic musical pieces, which all require lower technical demands, we can see the composer's intent to present his more simple instructive and diadactic compositions. Each title is more-or-less bringing a limited number of guitaristic elements, usually on or two per piece such as: two-voice compositions, basses with the higher line melody; arpeggio used in a similar way; clear one-tone high melody lines with simple chord and bass accompanying material, etc. Suggested fingerings for both hands make the publication even more acceptable, and it certainly can be used to augment the general guitar instructive material for young players." - USA Soundboard Magazine

Circle's End features on a CD devoted to the compositions of Steve Marsh by one of Ireland’s leading guitarists, Brian Farrell.

Click here for a lovely overview of some of Steve's pieces by Selina at Stafford Guitar.