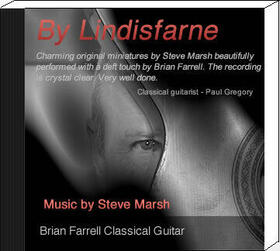 One of Ireland’s leading guitarists, Brian Farrell, has devoted his latest CD to some of the compositions of Steve Marsh. Titled ‘By Lindisfarne – The Music of Steve Marsh’ the programme ranges from a few of Steve’s earliest works written in the 1980’s through to some of his latest ones – including the title track – written in 2014.

From guitar legend, Gordon Giltrap: "It has been my pleasure to know the guitarist/composer/teacher Steve Marsh as a friend and my music book publisher for many years. We have shared the stage on a number of occasions and I even played on an album track of his many years back when he was recording an album with the singer Judy Dunlop.

I knew Steve had composed and published many solo pieces for classical guitar over the years, along with numerous pieces for various guitar ensembles, but it was only when I heard the pieces performed superbly by Brian Farrell on the 'BY LINDISFARNE' album that I understood the true magnitude of the man's composing skills.

Each track is a gem, and like most albums I have my favourite tracks, but with this collection it is truly hard to chose, so to that end I shan't and just say what a fine album this is. Brilliantly performed and recorded, this is a 'must have' album if you like fine modern guitar compositions for the 21st century."

You can read more about Brian Farrell and buy the CD here.

How We Grade Our Music

Submit Your Compositions And Arrangements