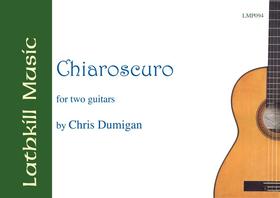 Originally written for solo guitar, this work was later expanded for two guitars and is the composer's first attempt at this combination.

The work is in four movements and is in an unusual form of variation. Each of the movements has two parts, the second of which is a variation of the first, but which is almost an opposite of it.

The suite gets its name from a style of painting wherein the artiste uses such violent contrasts in his canvas.