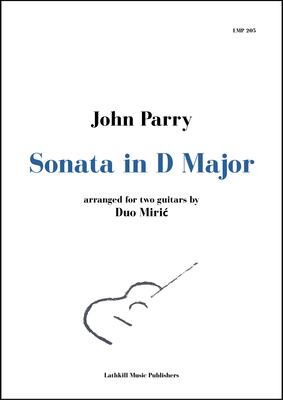 How to Purchase
Sonata in D Major by John Parry arranged for two guitars by Duo Mirić.

This piece is little known outside of the harp community but works so beautifully on two guitars that it could almost be believed that it was conceived for those instruments.

It is a piece born of two musical styles having a compact ‘proto’ classical sonata-form Allegro first movement followed by an Andante then a Gavotte both of which are in the baroque suite tradition.

Highly recommended for duos looking for uplifting music to start a recital that is something a little different to a Bach or Vivaldi concerto.

It takes approx. 8 minutes to play the whole sonata and the stand out first movement lasts 3 minutes.

Duo Mirić are twin sisters Darka Kooienga (née Mirić) and Tanja Mirić. They have been playing together for over two decades. Each holds a D.M.A. from the University of Minnesota, an M.M. from Southern Methodist University and a B.M. from Mississippi College. Notable concert appearances include the St. Louis Classical Guitar Great Artist Series, the Schubert Club Courtroom Concert Series, the Fort Worth Guitar Guild, and the Ensemble Showcase at the Guitar Foundation of America Convention.