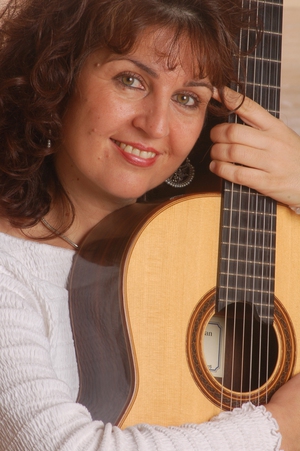 Lathkill Music Publications is proud to present the

a series of works which feature in the concert repertoire of this wonderful Greek guitarist.

Described by USA Review as doing for the Greek soul what flamenco does for the Spanish, Eleftheria Kotzia has toured regularly in Europe, Canada, the United States, South America, North Africa, Australia, N.Zealand and the Far East. She has performed both as a soloist and with orchestras at many of the great international festivals, including the 10th Anniversary Series of the D'Addario Foundation for the Performing Arts in the USA, the Festival Estival in Paris, the Tavener Festival in the Athens Concert Hall, the Segovia Celebrations in Spain, the American Guitar Festival (G.F.A.) in the USA, the 10th Anniversary Series of the Festival de Guitarras Del Mundo in Argentina, the City of London Festival and various other international festivals in the UK.

Born in northern Greece, in Alexandroupolis, Eleftheria Kotzia studied guitar at the National Conservatory in Athens, the Conservatoire National Supérieure in Paris, and finally at the Guildhall School of Music in London. Among her teachers have been Julian Bream, Alexandre Lagoya, Dimitri Fampas, David Russell and Timothy Walker. She was the winner of the first prize in the 6th International Guitar Competition in Milan.

When Eleftheria made her London debut the Times admired her skill, unfailing beguiling tone and her ability to vary her touch with fluency. Since then Eleftheria Kotzia has performed for various radio and TV stations, including the BBC and WNYC and has given recitals at some of the most famous concert halls in the world, including the Merkin Concert Hall and the Carnegie Recital Hall in New York, the Herbst Theatre in San Francisco, The Wigmore Hall and the South Bank Centre in London, the Megaron Concert Hall in Athens, Les Halles and the Amphitheatre Richelieu in the Sorbonne in Paris, the Jubilee Hall - Raffles Hotel in Singapore , The Rudolfinum in Prague.

Eleftheria Kotzia has an impressive list of recordings to her credit. Among them the first recording of Michael Tippet's The Blue Guitar, which was described as life enhancing, enjoyed unanimous critical acclaim and was selected by Gramophone magazine as a Critic's Choice Recording of the Year. The American Record Guide hailed her as a wizard-a strong sensuous player with bite and sass. John Tavener's only solo guitar work, Chant, was also recorded for the first time by Eleftheria Kotzia, in a special adaptation made for her by the composer.

Kotzia was selected to represent Greece in London's Millennium Celebrations: String of Pearls. She played the guitar part in the first performance of John Tavener's Fall and Resurrection in St Paul's Cathedral, London, which was televised live and subsequently issued on CD/DVD.

An important initiative has been her encouragement of non-Greek composers to write Greek -influenced music for her. Her uniquely pioneering work has resulted in compositions by such composers as Stephen Dodgson, Carlo Domeniconi, John Duarte and Edward McGuire, all of them influenced in their different ways by the richness of the Greek musical heritage. She has also presented numerous works by Greek composers in her recitals around the world. Other compositions dedicated to Eleftheria Kotzia include the Levantine Suite by Dusan Bogdanovic, and works by the Chilean composer Edmundo Vasquez.

Eleftheria Kotzia teaches at the Royal Welsh College of Music and Drama and gives master classes and training courses around the world. She is a frequent judge in international guitar competitions. Within the Catalogue of Lathkill Music Publishers she directs the Eleftheria Kotzia Series, which features new, contemporary music for guitar.

Estonian composer René Eespere wrote a new guitar concerto for Eleftheria that she premiered in October 2007 in Tallinn Estonia and subsequently recorded it in 2008.

Since 2007 Eleftheria kotzia has been the director of the International Guitar Course and Festival in Ligoure , France.

Submit Your Compositions And Arrangements