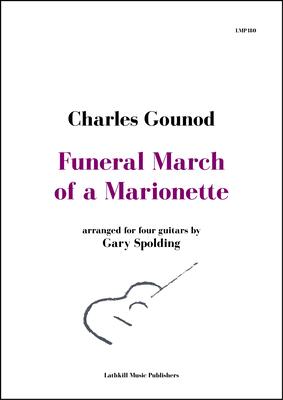 Funeral March of a Marionette by Charles Gounod is best known as the theme music for the television program Alfred Hitchcock Presents later called The Alfred Hitchcock Hour. This arrangement for four guitars or guitar orchestra by Gary Spolding makes the most of the colour contrast available between normal and pizzicato playing and the dynamic contrast between piano and forte.

Lasting approximately 5 minutes, the arrangement will suit an ambitious and enthusiastic group of guitarists who have reached grade 2 to 4 standard. It’s hugely fun to rehearse and guaranteed to make an audience smile. Guitar 2 has been intentionally crafted to make it accessible for a player of grade 2 standard without sacrificing musical interest or relevance and Guitar 4 makes effective use of string 6 tuned down for a pizzicato low D.

If you work in education, this arrangement has these useful features…
- lots of swapping to and from pizzicato and not just in the lower range.
- several 4 part fugue-like passages.
- a change of key from D minor to D major and back again.
- many moments that require precision ensemble playing, especially around rests, that foster eye contact and ensemble awareness.


This piece is one in a series of arrangements by Gary Spolding for beginner guitar ensembles. Each arrangement has at least one guitar part that is accessible to a player of ABRSM grade 2 standard and the other parts are never more difficult than grade 4. They can be performed as guitar quartets with one player to a part or by guitar orchestra with multiple players per part making them ideal for guitar societies or school concerts.

If you like the look of this arrangement then Falla's Miller's Dance may also be of interest.